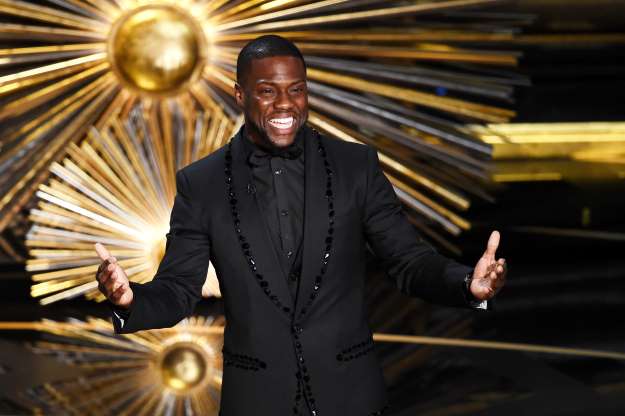 What was this mega star and comedian doing on the night of the Oscars? well he was boxing, yup! The ‘Jumanji’ star laced up his boxing gloves and hit the gym for an invigorating workout as he pummeled the punching bag. An Instagram video was posted on Kevin Hart’s page of him in the gym working out with the Oscars Award ceremony showing on a screen in the background.

This, after the ‘Night School’ actor had been selected initially and announced as the host of the 91st annual Academy Awards, but subsequently stepped down just weeks later following an uproar over refusal to apologize for homophobic remarks made by Hart some years ago. However, Kevin Hart on December 6, 2018 made these comments via Tweeter – “I have made the choice to step down from hosting this year’s Oscar’s… this is because I do not want to be a distraction on a night that should be celebrated by so many amazing talented artists,” he then went on to remark that he “sincerely apologize to the LGBTQ community for my insensitive words from my past.”

On the night of the Oscars, this was his post on his Instagram page, during his boxing workout with trainer Hino Ehikhamenor, “When you feel like u have nothing left is when you find a way to push & give more….Always grinding. #HustleHart …. Shoutout to @hollywoodhino for always pushing (sic)”.

While earning support from Ellen DeGeneres, Hart still affirms that he would never host the Academy Awards ceremony in the future. He believes, the criticism was bigger than the Oscars. Hos views were captured in these words, “That’s an attack to end me. That’s not an attack to end the Oscars, that’s an attack to end me. This was to destroy me. This was to end all partnerships, all brand relationships, all investment opportunities, studio relationships, my production company and the people who work underneath me. This was to damage the lives that had been invested in me. It’s bigger than just the Oscars. It’s about the individuals who are out there now that are finding success in damage.”

The very talented comedian and producer went on to say that he was done with it, meaning talking about the controversy and that it wasn’t getting anymore energy out of him. He reiterated that he apologized and that if it was accepted then that is great, if not, he has no control over it and he is over it.

And these were his last words on the topic, “I have explained how I’ve evolved, which makes me say I’m over it. I’m not saying how I’ve changed anymore … I’m not giving no more explanation of who I am. I’ve done it. I’ve done it several times … I’m just done.”

Every year, the holiday shopping season has become more and more hectic. People are rushing to find the best deals for everyone on their…

Best Ways To Expand Your Vocabulary

Traveling is one of the greatest methods to learn about the world, learn about yourself and get to know new places and people. Traveling…